How the Jacket Pile Gripper is firming IQIP’s grasp offshore

Used to ensure a levelled position and provide stability during grouting, IQIPs Jacket Pile Gripper (JPG) has been applied in the constructions of offshore jacket foundations for decades. Furthermore, in recent years, increasingly strict Early Age Cycling standards have made JPGs and FEA simulations essential to demonstrate and secure compliance.

As a temporary equipment welded or bolted onto the jacket structure, the JPG minimises movement between the foundation pile and jacket leg or sleeve during grouting and curing. It does so by creating a temporary clamped connection between pile and jacket thereby also offering an optional jacket levelling function. Crucially, with regard to Early Age Cycling, the JPG also provides the possibility of maintaining relative movement at the grout-steel interface to a maximum of 1mm until sufficient grout strength is reached. This is required to adhere to the DNVGL standards of 2018.

“Learning from the past, some grouted connections have shown signs of damage related to the curing conditions; damages such as cracks that can have catastrophic effects on the lifespan of a foundation, and that’s why this standard originated,” explains the project manager adding: “In the last five years or so, Early Age Cycling has become an increasingly hot topic all over the world, from the North Sea to Taiwan. We have proven through several projects that we can comply with the strict requirements, and that’s incredibly important to our clients, especially in the wind industry where you want the lifespan of foundations to be as long as possible.”

Originated in 2014, the DNVGL standards were further increased in 2016 and now limits global relative displacement to 1mm. 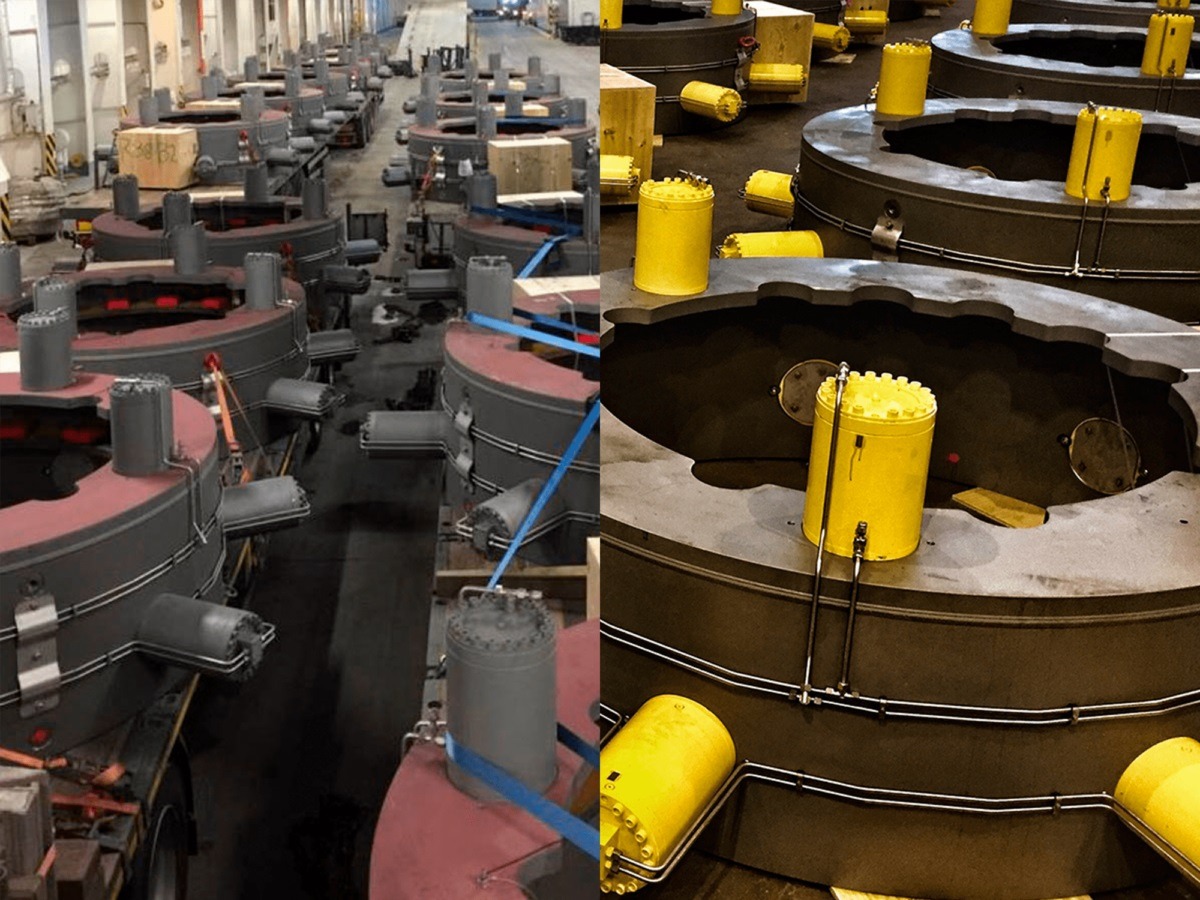 According to the DNVGL standards, the movement between the inner and outer tubular steel members of the jacket structure should be determined for the maximum sea state expected during the first 24 hours of grout curing. This means that compliance with the requirement of 1mm can be extremely difficult to demonstrate with environmental factors such as hard wind and high sea imposing shifting loads to the jacket. Furthermore, with a grout zone length of 5-10m and more, accurately measuring movement during the 24 hours of grout solidification is implausible.

Luke He, lead structural engineer, explains: “As it is now, it is impractical to measure the movement subsea during the grout solidification phase. Instead, we use finite element analysis (FEA) to simulate the structure. You build up the 3D FEA model of the JPG, the jacket leg and pile, after that you impose dynamic environmental loads, and then you measure the occurring movement in a computer-based simulation. In this way, with a ‘virtual reality’ simulation, you will get accurate and predictable results.”

This means that with compute models and JPGs, compliance can be ensured, and small operational weather windows can be prevented from lowering workability, causing delays, and adding costs. This is also the case in situations that cause damages and leakages to the hydraulic lines, which go through or along the jacket to allow the JPG to be operated and activated from the surface. In such cases, a backup system allows the JPGs to be operated subsea from the ROV interface panels or via a subsea hydraulic distribution manifold. This means that JPGs can always be activated, and, if necessary due to, for instance, extreme weather, after activation, the structure can be temporarily abandoned.

Having supplied hundreds of JPGs for major offshore wind farms, IQIP has a long track record of successful projects including several projects adhering to the DNVGL Early Age Cycling standards. In the past few years, the company has completed multiple projects in Taiwan and the North Sea, making it the very first JPG supplier to comply with the DNVGL 1mm standard.

“With this kind of project, we want to work proactively for our clients. We can do more than just supply equipment; with our specialist knowledge, we can partner up with our client and help them demonstrate and prove to marine authorities that the foundation installation can comply with the 1mm rule, and that is key to a successful project. Without approval from the authorities, the client might have all the equipment, but the project will not be completed so it’s an essential step,” stresses IQIP’s project manager.

IQIP is also currently working on and providing EAC solutions for grouted connections of monopile foundations with gripping and levelling functions.

The Jacket Pile Gripper in short: 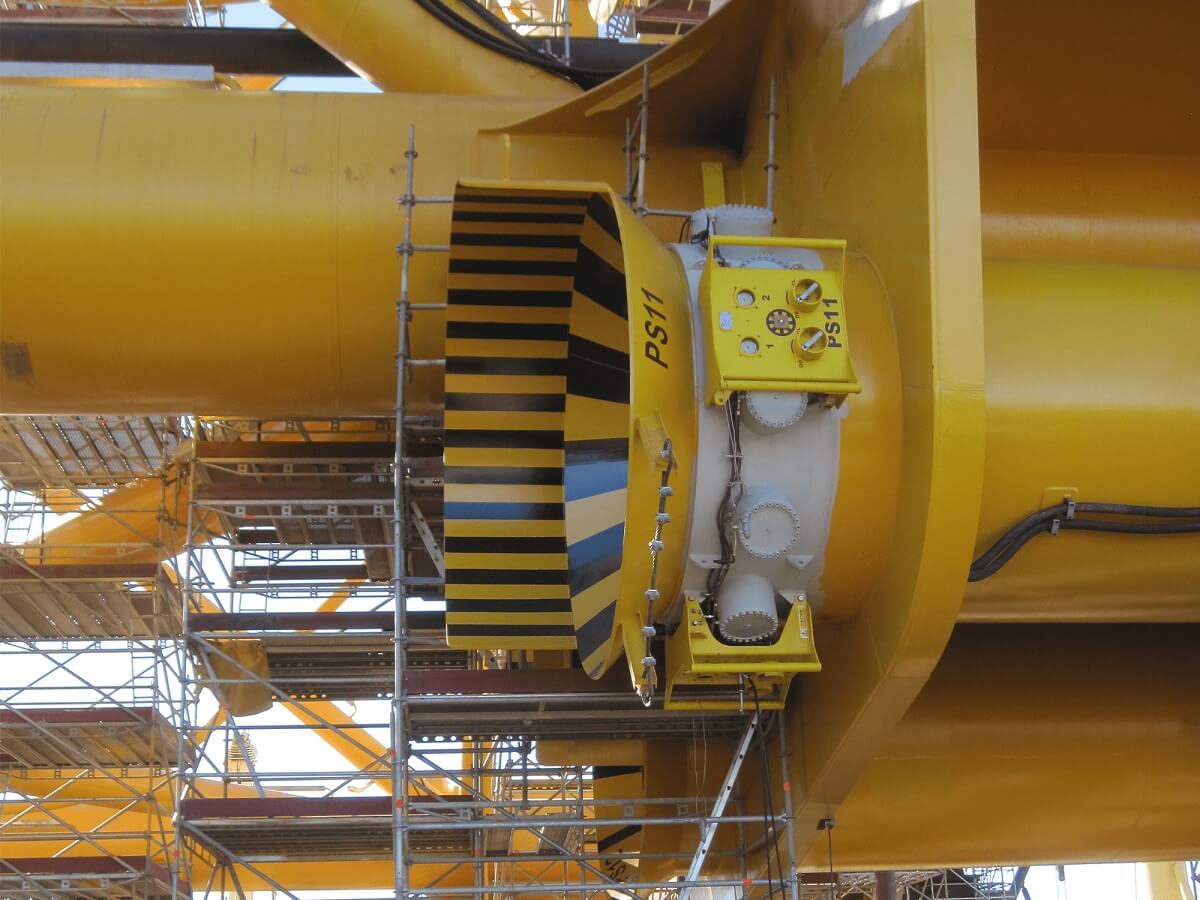 DISCOVER MORE ABOUT OUR PRODUCTS