Minimising underwater noise while maximising the installable pile size, IQIP’s BLUE Piling Technology may open up new waters to the monopile foundation. The pile driving technology, which uses water as an impact weight, is set to be ready for offshore deployment in the second half of 2021.

Despite the widespread consensus that a continued expansion of wind energy is key to meeting climate goals, developers of offshore windfarms face multiple challenges in the permitting process. A prevalent obstacle is the concern about the effect of underwater noise on marine fauna and the resulting increasingly strict noise limits. Mitigating noise at the source by driving with a gradual push rather than the short impact of a steel ram, IQIP’s newest hammer, the BLUE Piling Hammer is set to provide the solution.

When first tested offshore in 2018, BLUE Piling proved capable of reducing noise levels by up to 20 dB (SEL), at the source. In many regions, this could eliminate the need for additional sound mitigation measures to meet legal noise limits. The developer behind the technology, Jasper Winkes, explains, “With BLUE Piling, basically we’re utilising a large water tank to provide a more energetic, but quieter blow, meaning that we’re gradually pushing on the pile. It’s a completely new technology integrating the noise mitigating into the hammer itself rather than adding noise mitigating measures to or around it.”

Since 2019, IQIP saw the potential of the BLUE Piling Technology and acquired the technology and the team. IQIP has dedicated its extensive in-house knowledge on designing and optimising hammers to address improvement points. Furthermore, the company is currently collaborating with the Geoscience Department of Delft University of Technology, which is conducting in-depth studies to establish the capability of the BLUE Piling hammer in different types of soil. 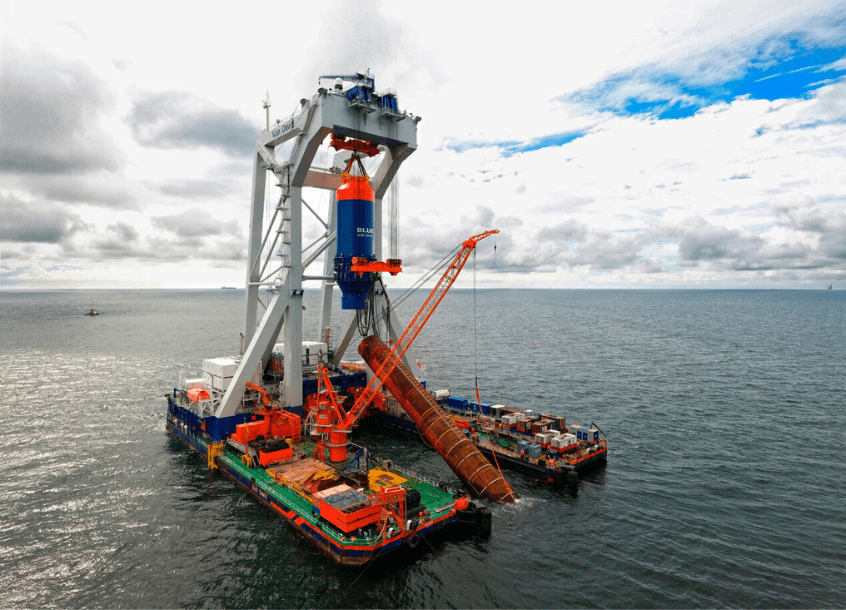 Taking the monopile to new depths

With the ever-increasing demands for larger wind turbines located at greater depths, alternative driving technologies such as BLUE Piling will eventually become essential. Firstly, because it can provide a noise-mitigation solution where deep water and strong currents make Big Bubble Curtains unfeasible. Secondly, because the gentle blow of a BLUE Hammer can reduce pile driving fatigue massively (compared to the traditional steel impact hammering) and, thirdly, because it can, notably, install monopiles even larger than the current XXL-monopiles.

There are two ways in which BLUE Piling may open up new locations to monopile foundations – one would be where noise constraints are really tough; another would be in very deep water. Previously, it was the commonly accepted belief that monopiles would not go deeper than 30 meters, then they went to 40 meters and now you have them at 50 meters. Most likely you will see that pushed even further, and that means the hammers will need to scale up as well but conventional impact hammers cannot be scaled infinitely; they reach a limit at eight meters top diameter and there are also limits to the bottom diameter to install efficiently. This means that at a certain point, it could be this technology which would allow the monopile to grow even further and into deeper waters.

Depending on the location and local regulations, the cost of noise mitigation may add up to as much as 15% of the installation costs, a cost that has to be added on top of the cost of conventional driving technologies.

Consequently, by applying a BLUE Hammer where noise mitigation is part and parcel to the pile driving equipment itself, significant savings can be made on the installation costs. Furthermore, costs can be saved by minimising installation fatigue and allowing for a more integrated monopile design to be installed.

The reason for this is that while driving with a conventional hammer, will necessitate most secondary steel to be added on the transition piece (TP) after installation, the lower acceleration level from BLUE Piling allows for a (partially) assembled monopile foundations with secondary steel attached to be installed. This could allow for boat landings and ladders to be driven down as part of the monopile and possibly for a TP-less monopile design. The cost goes down on two points – noise mitigation and more optimised designs. This is why IQIP believes this system has global potential – the environment is not just a concern for wealthy nations. Reducing the noise at the source just makes sense.

BLUE Piling will be compatible with existing installation vessels and interchangeable one-to-one with conventional hammer technologies.

DISCOVER MORE ABOUT OUR PRODUCTS

IQIP INVESTS IN THE SOUND OF SILENCE

Putting the pressure on pile removal